Calculate shipping cost
More products from Targus...
The Power Battery Grip is a powerful and versatile accessory for the Nikon D40/D40X camera. It replaces the standard battery source with its own built-in, rechargeable, high-capacity battery pack (non-removable). In addition, it provides a vertical grip, which makes vertical shooting as easy as horizontal shooting.

The built-in rechargeable Li-Ion battery eliminates the need of having to charge and carry around multiple battery clusters. The built-in battery can be used for thousands of pictures before having to be recharged. 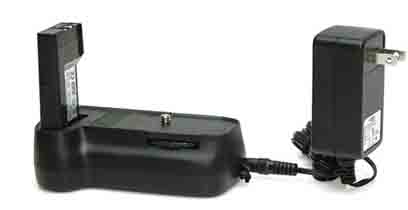 
Impeccable Service
We strive to ensure all of our customers receive the highest of service. We listen to your feedback and do what we can to tailor our service to your needs.
Safe Transactions
Ordering with 42nd Street Photo is safe, easy & fun. We assure that every transaction you make with us is 100% secure. In addition to using Secure Sockets Layer (SSL) protection technology and a VeriSign Secure Server ID, we are also checked daily by an independant security company called ScanAlert. You can also be assured that your name and confidential information will never be distributed, sold, or rented.